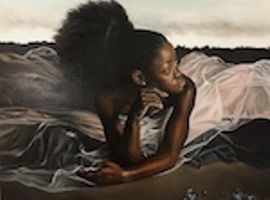 This is Chicago artist Gerald Griffin’s second exhibit at the museum. His first in 2016 featured a powerful and exquisitely crafted series of paintings celebrating the black experience titled "Ambiguous Reflections of Race and Identity: A Question of Color." That exhibit was made possible by a grant from the Purdue University Black Cultural Center (BCC). His works were so striking that the museum purchased his painting titled "Black Friday" for the permanent collection. Today, it is on long-term loan to the BCC, where it is continually exhibited in a special niche on the second floor. This second exhibit is also being sponsored by Purdue’s BCC, and in his new series, “Paradigm Shift: A Black Narrative Perspective,” Gerald shows his talent, not only in oil painting, but also works in lithography, bronze sculpture, and original poetry. "Paradigm Shift" further explores the ideas of race and ethnicity with an understanding of past societal attitudes of cognitive dissonance concerning these issues, and as an evolution of his previous series "Ambiguous Reflections." It is also inspired by the current political climate and the revitalization of attitudes of racial intolerance. The new works continue to challenge the notions of our present and future response to past attitudes by including different mediums such as lithography prints--which are multiple originals that further enhances the collectability of the works and in turn creates opportunities for wider engagement. The exhibit moves beyond 2-dimensional surfaces to 3-dimensional works that engage viewers on a more intimate and tactile level.