In-Person EXHIBIT: The Rudiments of SuPre: works by Boyd Smith 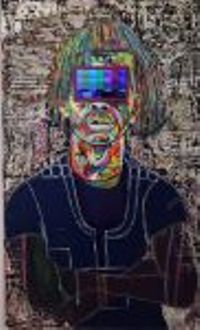 PLEASE NOTE: The museum is open to visitors Sundays (1-4PM), and 11am-4pm on Tuesdays, Thursdays, Saturdays. FREE advance reservations and masks are required for entry to the museum galleries. See our website for tickets and more information, under the VISIT tab. In 1995, a criminologist named John DiIulio falsely predicted that there would be an explosion of violence caused by young Black men, whom he coined “super predators.” This myth created a baseless fear that heightened government surveillance programs, intensified policing, and fueled mass incarceration within Black community. That same year, on February 5th, Trayvon Martin, was born. The life of Trayvon Martin, a 17-year high school student, was taken when George Zimmerman fatally shot him in Sandford, Florida. Martin’s murder sparked global uprisings and brought international attention to America’s violent racial history against Black people. On February 26, 2012, the night Martin was murdered, Boyd Smith recalled watching a documentary about ‘super predators’ and considered how the racist ideology that fueled this term, not only reinforced Zimmerman’s violent action, which resulted in killing Trayvon; but was also the very foundation of the “justice” system that enabled Zimmerman to be acquitted. During the time of Zimmerman’s trial, he transitioned to West Lafayette to pursue a degree in Electronic and Time Based Art at Purdue University. As he decided on my thesis project, Smith was moved to create a series that would highlight the unjust racial violence he’d been seeing and provide a visual space to claim justice for himself and his community. The Rudiments of ‘SuPre’ is a collection that reflects on how the idea of super predator shapes the violent realities experienced by Black people in our contemporary moment. Smith explores mixed media practices in order to highlight the complexities of this lived experience, and work to provide a counter visual that re-sensitizes the audience to Black bodies and Black life. The creation of ‘SuPre’ a fictional character in my work helps to challenge the demonization of Black boys as super predators and instead allows them to see themselves as protectors of their communities.