Crawfordsville officials are preparing for the state to send people to vet the city’s Stellar Communities grant application. The city was named a finalist earlier this month and now Mayor Todd Barton (R) and other leaders are formulating a presentation to make their case in more detail.

Because Crawfordsville is losing younger citizens, Barton plans to use the Stellar money to enhance the city’s downtown. His proposal centers on what he calls a “fusion center” – bringing like-minded people and groups together to enhance collaboration and efficiency.

But Barton says the term “grant” is misleading, because no specific dollar amount is discussed in the process. Instead, he says, the application refers to tourism, volunteerism, and entrepreneurship.

“There are a lot of, I think, misunderstandings with the program, and, you know, people refer to it as a grant, or something like that, and that’s really not the case. You’re really trying to create a vision for your community, and, you know, married with that vision is- really are certain projects that would make that vision more of a reality,” Barton says.

It’s also the first year the grant has been subdivided. The state now offers one award to a town with fewer than 6,000 citizens and one to towns with more than 6,000 residents.

Barton says he’s not letting the competition between his city and the other two large-market finalists – Decatur and Marion -- influence his proposal decisions. 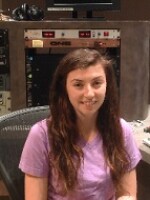 Carey Ganz
My name is Carey Ganz and I’m a sophomore at Purdue and a WBAA news intern working for Stan Jastrzebski. Working for WBAA has been a great way to gain experience in the field of Communication and it has given me the practical experience I need to enter the work force in the future. Since working at WBAA, I have learned how to write better stories, edit and use technology that I never would have been exposed to in the classroom. I have also learned how to think quickly and on my toes, because of the fast pace of radio. I’m grateful for WBAA, interning here has given me valuable workplace experience that will advance my career opportunities when I graduate.
See stories by Carey Ganz