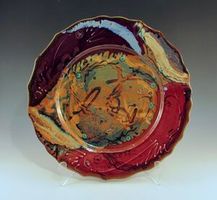 While the Art Museum is still closed to the general public for the month of June, this exhibit can be seen online now at www.artlafayette.org. Scott Frankenberger’s beautiful and functional pottery has been sought after by hundreds of collectors. His work is represented in galleries across the United States and in the Art Museum’s Shop. A potter since 1974, Scott works from his studio in West Lafayette, Indiana. For the first 25 years of his career, he produced pottery out of a basement studio. He now enjoys a spacious, well-lit workshop. Most of Scott’s work is functional porcelain, intended for use in the home or workplace. He enjoys embellishing the surfaces with a variety of marks and textures, as well as building up a layered blend of colors from overlapping glazes, slips, and overglaze decoration. From the most basic cup or bowl to large scale sculptural forms and murals, you can see a complex surface that invites the viewer to “fall in” and roam through the form, colors, textures, and markings. It is very important that the piece feels good in the hand, with a pleasing heft and balance during use, while simultaneously inviting the mind and eye to roam the surface and form for surprises and pleasures. This exhibit spans the artist’s 45-year career, where you will discover not only subtle variations in style over time, but also many of his experimental non-functional art. Artist Statement I began my college studies as a math major, but was soon seduced by art classes, both studio and appreciation lectures. After a half-year abroad enjoying many museums in Europe, I was hooked. I received my BA from Lawrence University in 1971, and later specialized in ceramics for my MA at Purdue University in 1979. I’ve been a studio potter ever since.